It was all concentration and learning down at the Dannevirke Tennis Courts on May 19 as Hockey Manawatu regional development officer Jayden Richards ran two hour-long training sessions with junior hockey players. He was also coaching the coaches, passing on valuable techniques which were much appreciated. As far as the players were concerned, Dannevirke Hockey coordinator Naomi says, “He ran a great couple of sessions and everyone was able to have fun and learn and practise their hockey skills.” Dannevirke junior hockey is in full swing again playing on Friday nights at the courts and at the high school. The 2021 Dannevirke Junior Hockey season kicked off on Friday, May 7. This year 140 children are participating from across all the schools in the district. Junior Hockey is very lucky to be supported by volunteer umpires from the high school each week managed by Laura Dawson. In addition to this, Sarah Milham and Elizabeth Laws coach our 22 youngest players from Years 0-2. Each week our FunSticks develop their knowledge of the game and learn valuable skills which they put into practice with a short but enthusiastic game. In the MiniSticks league (Years 3 & 4) we have five teams competing with 6 teams in both the KiwiSticks (Yr 5 & 6) and KwikSticks (Yr 7 & 8). The majority of the interschool tournament is played at the tennis courts, with the older players (KwikSticks) playing up at the high school turf. The season will run until the end of term, finishing up with prizegiving on the Friday, July 9 at the Anderson Street Sports Centre. A special honour was afforded Dannevirke when on Tuesday night, June 1 one of our local Dannevirke players was invited to run the ball out for the start of the women’s transtasman match in Palmerston North. Grace Morgans from Ruahine School was the lucky winner of this awesome opportunity, made possible thanks to turf hosts Hockey Manawatu. 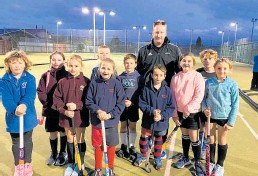