The Manawatu Secondary Schools’ Sports Awards ceremony went online this year and was screened via the Sport Manawatu¯ Facebook page. The awards ceremony on Wednesday, November 10, celebrated more than 140 athletes from 41 different sporting codes. To her delight, Stephanie McNair of Dannevirke and Palmerston North Girls’ High School featured, co-winning the Manawatu Secondary Schools Sportswoman of the Year alongside Miniah Summerell, a weightlifter from Manawatu College. Stephanie also received the award for smallbore rifle shooting. Her citation reads: “Stephanie McNair from Palmerston North Girls’ High School shot for many NZ open, women, and junior teams in 2020 and 2021. “She is in the top open grades for both indoor and outdoor competitions competing with shooters of all ages. Stephanie was also a part of the Palmerston North Girls’ High School target rifle shooting team.” Stephanie has once again had a stellar year in the sport, starting in February when she attended the New Zealand Smallbore Rifle Outdoor Shooting 50m Nationals in Christchurch and qualified for every NZ team for which she was eligible, which included the NZ Women’s Randle Team, the Slazenger NZ Open team and the North Island team to name three of the eight. This culminated in Stephanie winning the Norwood NZ Supreme Rural Sports Person of the Year against all sports and all ages in March. Since then she has been selected to compete in the North Island junior, women’s and open teams against the South Island. All four members of her family — mum Ruth (open women), dad Robbie (open men) and sister Caley (junior) — had made the teams and had their bags packed for Christchurch when Covid lockdown occurred. In the aftermath, Stephanie and Caley competed in the PNGHS smallbore team with postal shoots, winning the NZ Triple S team event with two others, then the TSNZ Challenge with a team of three. As a result, PNGHS awarded Stephanie with the Sports Dux for the second year and her team was Team of the Year for the second year. At the time of publication, no trophy has been sent from the Manawatu Secondary Schools Sports Awards. 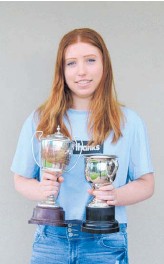