Eketa¯huna’s Main St was the official launch site on October 29, for the first mobile MP’s office in New Zealand for Wairarapa MP Kieran McAnulty. “MPs get funding for two offices and I had to pick where to put my second office,” said McAnulty. “The electorate is very large, from Waipawa in the north, right down to the Southern Coast. “I thought there must be a better way to service the electorate this size. No MP previously has used a mobile office. I had to get Parliamentary Services to come up with new policies (including security). It took them seven months to come up with a plan as to how we were going to make it work. We finally got there. “I’ve used the money for hiring an office instead for hiring a campervan over the next two years until the next election. “We’ve done the security improvements inside and signwritten it. I will bring myself and my office to every town in the region, as opposed to expecting people to come to one town and meet. “I wanted to be an accessible MP and this was a good way to do it,” he said. Local resident John Haar has been living in Eketa¯huna for 30 years. “I appreciate it,” he said. “The reason we’re launching it here in Eketa¯huna is because this is my family home — my parents grew up and met here,” said McAnulty. “It was important to me, the whole point of this is to come to the small towns and give them access to their MP. There was no better place for me to launch it than Eketa¯huna. “I pride myself in being accessible and being able to go out and hear what people are saying and take that back to Parliament, which is my job. “When you think of someone prominent, well-known and respected in Eketahuna, there really is only one name that comes up and that is Margaret Parsons. “She recently won the Tararua District Council Civic Award for her contributions to Eketa¯huna. We asked her if she would officially launch the mobile office and she accepted.” She cut the ribbon and said to Kieran McAnulty, “It’s an honour to be doing this for you.” “I’ve tried to make sure I’ve got all the placenames of the electorate, all 203 placenames — including the largest placename in the world, it goes all the way around the side of the campervan,” said McAnulty. “I only had one request from the designer, to have Eketa¯huna’s name above my shoulder.” Last Saturday, Kieran McAnulty received a death threat, after parking his mobile office, from a group who confronted him about Covid vaccines and associated government mandates. “I don’t think it’s appropriate to say public representatives need to be killed and incite similar comments online. I recognise this is a very small group and does not represent the dominant view of people in Wairarapa.” 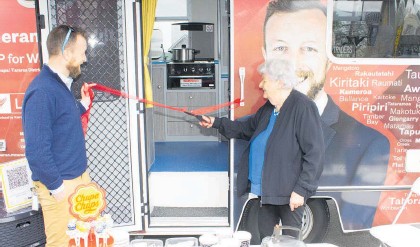