Eleven young farmers from Dannevirke and South Wairarapa clubs competed in the Southern East Coast District Finals at Woodville Race Course on Sunday, November 14. Four went on to qualify for the regional final at Waipukurau in April joining four qualifiers from the Northern East Coast which held its district final the week before. Co-conveners Kit Holmes and Sam Cooper supervised the running of 12 modules as the contestants each were tested on some aspect of farming every quarter hour, each module run by a local sponsor which recorded the results. Modules included: changing a ute wheel, identifying fertilisers, ageing and drafting ewes, putting a chain on a chainsaw and cutting a log in three, loading and riding a bike with fencing gear, building an electric wire fence, assembling a dairy claw and pump unit, building tepee support for a tomato plant, answering questions on-farm risk, Filling out a questionnaire on farm finances, boning a forequarter and creating a roast, linking a tractor and trailer then backing it. The finale was a head-to-head race in which contestants had to split the wood they cut with the chainsaw, assemble a 10-metre electric fence and slide a slippery slide to the finish. Unfortunately, just as that began, a violent rainstorm hit — making even visibility tough but all finished somewhat bedraggled but smiling. These young people are a tribute to the farming community and a small indication of its future. The coconveners had been contestants in previous years and thanks to them and the sponsors it was an enjoyable day in which the contestants learnt a lot and most importantly had fun. 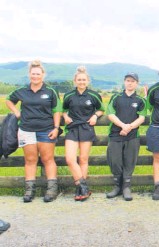