New premises for Dannevirke’s Fantasy Cave have come a step closer to a reality as compliance work nears completion. Fantasy Cave Board chairman Grant Hurrell said while it might appear nothing was happening, there was plenty of work going on behind the scenes. “All the resource and building consents and reports have been completed and granted and tender documents professionally prepared,” said Hurrell. “There has been $160,000 raised in sponsorship towards construction costs and as well, in excess of $400,000 made up of professional and community donations has been contributed. “Open tenders were prepared by a professional company and the tender was won by local company Morris and Bailey. We know we have received a very fair deal.” He said the board was proud of the fact that everything that had to be done so far had been paid for. “We have no debt and we have money in the bank to assist with the project going forward.” Hurrell said preliminary site work had taken place with the lifting of parts of the concrete floor in the building known previously as Mills Garage, which will be demolished to make way for the new Fantasy Cave. Project manager Bruce Johnson said operators have been on site collecting soil samples for testing. “We decided to carry out the soil testing now rather than later, while the building is still covered in,” he said. Samples were taken from two areas. Hurrell said while the soil testing was a positive step forward, demolition of the existing building wouldn’t begin until the board had acquired the majority of funding for the build. 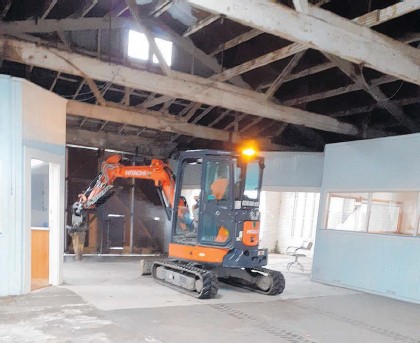