Woodville AFC have successful year despite an early closure

Woodville Football Club’s 2021 season came to an end three weeks early, coinciding with the alert level 4 announcement on August 17. The season was still a success with the club holding more than 100 registrations, up 30 per cent from the 2020 campaign. As a prelude to the season, club coach and passionate footballer Angus Hutton, together with his wife Esther, presented Football in Schools to the local education providers. The programme had a successful outcome returning positive feedback from the community and resulted with an increase in our numbers. The bulk of these new players were in the early 4-8-year-old age grades and are the future of Woodville AFC. The club also further expanded with a youth team in its line-up for the first time in several years. The Vulcans played in the Manawatu Secondary Schools U15 Division 1 competition. The team was made up of players from across the Tararua district and provided a great opportunity for them as many of these teens may have missed out on secondary school football otherwise. WAFC, with the backing of Central Football, were proud to be able to fill this gap and offer the chance to keep players in the game. Congratulations to the players who formed this team and represented the Woodville colours superbly in an intense Manawatu¯ competition. With the easing of Covid restrictions the club was able to hold their annual prizegiving, complete with the infamous “Players v Supporters” matches. Owing to restrictions, our prizegiving did look a bit different this year, with each grade holding separate events to ensure we met the necessary requirements. There was some great football played by the players and their parents. It was refreshing to hear the laughter and joviality at Hockey Park one last time for the season. Across town, at the Woodville Recreation ground, the Vulcans faced off against their parents, supporters and coaches in a more intense competitive battle ending in a draw. The prizegivings saw all players presented with their team photo and a club medal each for participating. The Most Improved Player and Most Valuable player trophies were also presented to players from the 7 and 9-a-side grades. Congratulations to our Most Improved Players Tazara, Hana, Eve and Sophia and to our Most Valuable Players Harry, Cruize, Jake and Riley. Congratulations are also extended to the Property Brokers First Kicks Most Dedicated Players William and Hayley and Tararua Camper Hire/ Coppermine Nursery Fun Football Most Dedicated Player Aarav. The Vulcan’s Most Valuable Player and Players’ Player award went to Ethan, with the Vulcan’s Most Improved Player going to Vasek. The Kevin Hanks Memorial Trophy for Sportsmanship was presented to Damian who played for Wind Farm Cafe 7-a-side team. He has demonstrated kindness, positivity, leadership and has been an excellent role model to the younger players in his team. The WAFC Volunteers Award was presented to Angus and Esther Hutton for their efforts with running the Football in Schools programme, and tireless efforts over the season. Club president Troy Leggett was delighted with what the club achieved this year. He said it was great to see Hockey Park at capacity with the increased numbers and the youth team was a huge success. The opposing teams often brought many travelling supporters with them from across Manawatu¯ into Woodville and it created a buzz about the town. “We even hosted a friendly match against a very credible Kapiti United side in decent Woodville fog and drizzle,” he said. Troy says the Woodville Football Club is an important part of the community, it is a great way for families to connect with each other and it offers a programme that not only teaches football but encourages kids to be active and co-operate within a sport-focused team environment. Over the warmer months, the Woodville club is offering summer football for the third consecutive year. This is proving to be popular, with players across the Tararua district attending to play in a social game of football in a fun and friendly community environment. 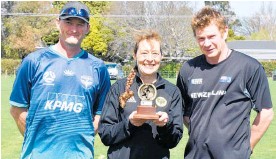 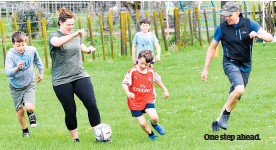 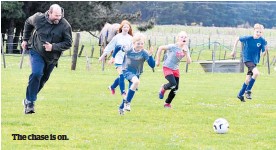