Swapping the bomb squad for his wings

To learn more about a career in the Air Force visit www. defencecareers.mil.nz

After 12 years in the New Zealand Army Leighton Joll is switching roles from jumping out of the back of aircraft to sitting up front and piloting them. He has just graduated the 17-week RNZAF Officer Commissioning Course at Base Woodbourne, where he was awarded the Robinson Memorial Trophy. Named after Pilot Officer Howard Allan Robinson who was killed in a 1957 crash, it is presented to the graduate who, in the eyes of their peers, demonstrated the greatest leadership. He will soon embark on training to become a pilot with the Royal New Zealand Air Force (RNZAF). Pilot Officer Joll, 31, from Hawke’s Bay, spent the earlier part of his New Zealand Defence Force (NZDF) career as an Explosive Ordnance Disposal Operator with the Army. “During this time I’ve flown in the back of Iroquois, roped from NH90s and jumped out of C-130s, so it will be interesting to be on the other side of the action,” he said. He had always liked flying and had been involved in paragliding for more than six years. “I started doing my private pilot license and decided to pursue flying as a new career. “Flying as a commercial airline pilot didn’t appeal to me in the long run. I liked the idea of being able to maintain the same feeling of purpose and belonging that the NZDF provides. “So I made the decision to apply for a change to the Air Force rather than leaving NZDF to pursue the commercial route,” Pilot Officer Joll said. While he knows there a few more years of hard study before he can call himself an Air Force pilot he has enjoyed getting a wider understanding of how another service does things. “The change of culture between the services has taken some getting used to, but it’s been really enjoyable,” he said. Pilot Officer Joll said anyone wanting to join the Air Force should give it all they have. “The NZDF is an organisation full of opportunities that you can’t possibly have anywhere else, and the rewards for the hard work are well worth it.” He is now looking forward to the next phase of his career and starting his pilot training at RNZAF Base Ohakea. 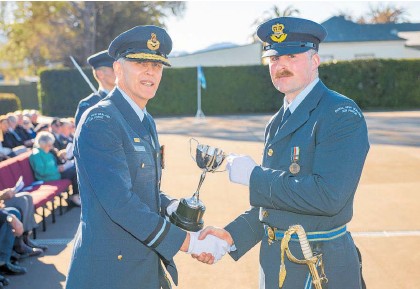