Hawke’s Bay has long been known for its wine. But beer and cider makers across the region are challenging that notion and quickly growing their own reputation — not to mention an impressive list of awards. Craft beer breweries and manufacturers Brave Brewing (Hastings), Zeelandt Brewery (Eskdale), Hawke’s Bay Brewing Co (Napier) and bStudio (Napier) all claimed national awards in recent weeks alongside cider maker Paynter’s Cider (Hastings). “We definitely hold our own in Hawke’s Bay — we have places like Roosters, Giant, Brave, GodsOwn, and each brewer is holding themselves highly,” beer maker Tom Heath said. Heath, a former wine maker turned beer maker, works at Zeelandt Brewery in Eskdale, who themselves won five bronze medals at the recent 2021 New Zealand Beer Awards. “We are a tiny craft brewery. For us to say we brew 50,000 litres per year does sound a lot but is actually tiny [compared to other companies],” he said. “For us to get five medals is a big, big deal.” It is the best result for Zeelandt at the prestigious awards, organised by the Brewers Guild of NZ, which were not held in 2020 because of Covid but returned this year. Heath said he was particularly proud of their three lagers, which all picked up bronze medals at the awards. “I think with lagers you can’t hide behind anything. “If you’re brewing heavy IPAs you can hide behind sweetness, bitterness, malt character and hops, but with a lager you can’t hide behind anything — it is what you get, and it shows a good brewer.” Zeelandt has plans to expand and open a garden bar this December right outside the brewery, which will be shared by Petane Wines. Brothers Chris and Phil Barber founded Zeelandt and Petane Wines next to one another in Eskdale. Brave Brewing in Hastings was the only Hawke’s Bay brewery to scoop a gold medal at the 2021 beer awards, for its Bottle Rocket pale ale. Brave also won three silver medals and four bronze medals for separate beers. Meanwhile, Napier brewing facility bStudio — which is used by top brewers across the country — won a top honour at the beer awards the Champion New Zealand Manufacturer. Hawke’s Bay Brewing Co in Napier also claimed one silver and two bronze medals at last month’s awards. Tekapo brewery Burkes Brewing Co was named overall best beer for its Unforgiven Porter. Last week, Paynter’s Cider, based in Hastings, was also named the winner of the Best Pear Cider at the 2021 NZ Fruit Wine and Cider Awards, for its cider named The Pict. The cider awards were held in Hawke’s Bay. 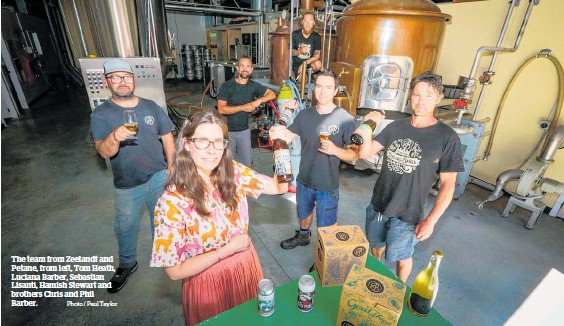