The future of Hawke’s Bay’s water storage woes could lie beneath our feet. With the region in drought for two summers running and any future large-scale water storage options still years away, Hawke’s Bay Regional Council has applied for consents for a trial new option — storing water underground. The council is proposing to take three million m3 out of the Waipawa River to filter through a man-made wetland into a shallow aquifer to be pumped into a lower level aquifer in a process called Managed Aquifer Recharge (MAR). Water storage struggles have continued in recent years after a proposal to build the controversial $330 million Ruataniwha dam above ground in Central Hawke’s Bay was blocked by the Supreme Court in 2018, despite almost $20m of expenditure by Hawke’s Bay Regional Council on consents and planning. The council is now applying for consent to progress a three-year trial for MAR, which is part of the Regional Water Security Programme (RWSP). When water levels are high in winter, the water would be piped from gravel under the river and gravity-fed across two farms to a third farm, where the water would be filtered through a constructed wetland. Regional water security programme director Tom Skerman said it would then soak through a series of “leaky ponds” into the shallow aquifer — essentially mimicking how aquifers are naturally recharged. “What we expect to see is the water table increasing and remaining high enough to protect the eco-systems of downstream waterways, even during the dry summers or droughts.” Traditionally, the deeper aquifer is where most of Central Hawke’s Bay’s water is drawn from. Skerman said a second part of the trial would involve test pumping the naturally filtered water into the deeper aquifer during the winter months when river levels are high. “In summer, we’ll trial recovering some of that stored water.” In partnership with local farmers, the recovered water will be used for a sustainable land-use trial to demonstrate new water conservation, cropping and land-use practices. It was an important part of building water security in the region, he said. Skerman said the Tukituki River, part of the Tukituki catchment which includes the Waipawa River as a sub-catchment group, had been identified as one of New Zealand’s most vulnerable to climate change impacts. It was an example of the global conflict between the supply of freshwater reducing and the pressure on water supply increasing. “While water consents from rivers and aquifers in Hawke’s Bay have been capped, we still need to build our resilience to climate change by working hard to supplement supply and reduce demand. “MAR has the potential to make an important contribution to increasing water security in this area and alleviate pressure on Central Hawke’s Bay’s main aquifer and waterways. If the trial is successful, a network of MAR sites could be strategically located to replenish groundwater.” Council had been engaging with mana whenua on the MAR trial since late last year to ensure any cultural impacts are identified. Hui are being held later this month, with marae located near the site to discuss a cultural impact assessment and the potential for a cultural monitoring programme. Federated Farmers Hawke’s Bay president Jim Galloway said it was a great move and a long time coming, given the delays since the Ruataniwha dam was first proposed. “It’s used a bit down in Canterbury and it’s been successful there, so it’s not totally new technology. It’s absolutely worth a go.” Without a form of reliable water storage Central Hawke’s Bay is becoming a “dust bowl”, he said, but with it apples, carrots and other crops would be far easier to grow. “Anything that can help water storage and security is great news. The biggest thing will be making sure we are not contaminating the aquifer.” Chairman of Tukituki water security project Mike Petersen said the proposal was part of a solution in addressing water security issues. “The security issues focus on making sure there is sufficient water to ensure the health of our waterways and people.” 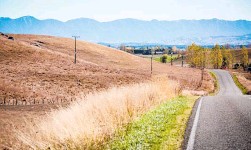 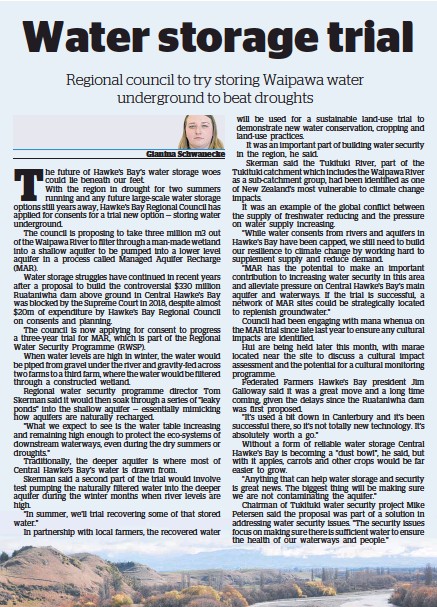