Shirley Hooper-Whiti will have mixed emotions when the doors to Turners Print Ltd close for the final time next week. When her late husband Dean died suddenly of a heart attack in May, aged 56, Shirley had to step up the very next day to keep the established printing business going and ensure orders were met. “I had to try my best to work out what he did and try and remember how he did everything. But there were things I just didn’t know,” she said. Dean was a qualified printer and the core business relied on his expertise. Turners Print had only just had a rebranding of the building, logo and stationery too. Shirley had looked at hiring a qualified printer, but it was truly a family business and couldn’t afford to employ a printer fulltime. The ideal scenario would be to sell the business as a going concern and that was looking likely to be the case until several buyers pulled out, the latest at the last minute after months of negotiations. With the landlord looking to list the building on Oxford St for sale Shirley had no choice now but to close the doors and sell what machinery she could. But the November 30 closing date hadn’t given her much time to inform customers. “I am upset that we are not able to give our customers more time and more notice. It was just not possible,” she said. “We were working hard to find other options, right up until last week. “There are people that have been with us for a very long time. I just want to thank them all for their support and service.” Turners Print Ltd was started in the 1970s by Levin men Terry Lomas and Graeme Turner, the latter operating it outright from 1986, at one time employing a staff of eight. Dean Whiti had served his apprenticeship with the business that he started working at as a 15-year-old, eventually buying it outright in 2005. He had more than 40 years in the trade. Shirley said she wasn’t sure what the next move would be, but she would take time to catch her breath. “I need to grieve for him . . . it has been really draining,” she said. If anyone wanted to discuss their artwork with Shirley, she could be contacted at deanshirley@turnersprint.co. nz. 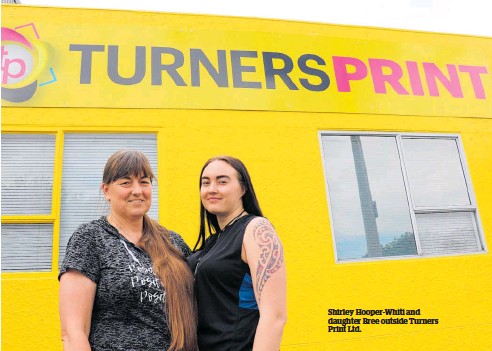