Road a health and safety issue for farmer

Adairy farmer working beside a killer stretch of road south of Levin that claimed four more lives this month made a plea to Waka Kotahi NZ Transport Agency to lower speed limits last year as part of the farm’s own health and safety review. Troy Hobson was so tired of cars crashing through the fence and ending up in the middle of his paddock that he permanently laid down the fence and leased some of the roadfacing land to a market gardener. Even though it was a straight stretch of road, a vehicle had crashed through the fence and ended up in the middle of the paddock four times in the past two years. Hobson said he couldn’t ignore the issue as part of the farm’s annual health and safety review, and wrote to NZTA. “It’s a death trap,” he said. Hobson said the road was so dangerous that he encouraged his staff to drive past the driveway and turn around at the end of the road on the way to work each morning. He said it wasn’t so easy for the milk tanker driver though, who ran the gauntlet each day entering and exiting the farm gate. “It’s really dangerous for the tanker,” he said. Hobson believed the passing lane needed to be done away with. Motorists saw it as an invitation to increase speed, but its short length meant some drivers panicked when they ran out of lane space. Although in theory passing lanes were designed to allow vehicles a chance to overtake slower traffic, drivers on the inside lane often also sped up, possibly without realising they were going faster. “They all put the gas on as soon as they hit the passing lane,” he said. Hobson said given the number of crashes, the road should be reduced to one lane and have the speed limit reduced. “They just need to get this new bypass through, too,” he said. Hobson’s comment were echoed by Woodhaven Gardens’ John Clarke, who market gardens several blocks of land along State Highway 1 and has tractors carting produce along the road every day. Clarke said the planned new highway between O¯ taki and Levin couldn’t come fast enough. In the meantime, he said the only option was to lower speed limits, in an effort to save lives. “Anything that can be done should be done. The answer now is to reduce speed along the existing road,” he said. “They need to speed up the new highway, but it could be 10 years away, and with the population forecast for the next 10 years, we need it as soon as possible.” Clarke said the existing road was not really a highway as it had multiple entries and exit points to homes and businesses between Manakau and O¯ hau, and the road was getting busier by the day. “There is a continuous flow of traffic and the passing lane is seen as an opportunity to speed up and overtake.” Clarke said all his tractor drivers were conscious of using best safety practices when driving along SH1. It was better to hold their line and wait for a designated passing area than to half pull over and leave drivers in two minds whether to pass or not. 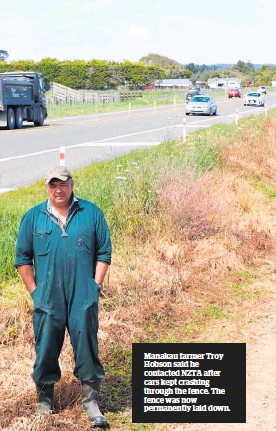 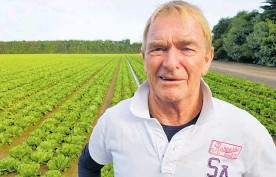