Amateur brewers get into the spirit

Although a 45-year-old Hawke’s Bay brewing company might have the word “amateur” in its name, there were a couple of very professional guests at the group’s last meeting. Formed in 1976 and known as the Hastings Amateur Winemakers Club, the Hawke’s Bay Winemakers and Homebrewers Club was established in 1981. Josh and Scott from award winning Garage Project were guest speakers at last week’s club night, the final of the year until Wednesday, February 3, 2022, says president Maurice Gray. “The speakers were excellent and the larger than normal numbers at the meeting were really impressed with the guys’ presentation. They gave us a background of the company and offered us samples of five different beers to taste, ranging from a naturally fermented zero alcohol hazy beer to an 11 per cent alcohol stout that had been in barrels with lots of extra ingredients that made it an amazing beer. Others included an IPA, a sour beer and a blood peach fruit infused beer.” Maurice says although they don’t hold another meeting until next year, they will visit the National Distillery in Ahuriri and have a club Christmas dinner, both in December, plus a club barbecue late January. The club boasts 25 members, including those from both town and country, says publicity officer David Grant. “Attendance has been patchy because of Covid. It has been difficult to get speakers and some members are cautious, so attendance is around a dozen. It has been a problem promoting meetings as several times we had to cancel on short notice.” David describes the aims of the club as to further the interest and art of home winemaking and to help one another with their interest wherever possible. “Nowadays our members also make home brew beer, cider, mead and liqueurs as well as various wines.” Although members usually leave their brewing equipment at home, David says sometimes people like to show their latest gadget at meetings. “The meeting format is usually a short business session, a presentation and then a tasting for the club competition.” Presentations can be a speaker from the industry including a commercial brewer, winemaker or spirits maker, followed by sampling some of their works. “Other guest speakers have been from Customs and even Yvonne Lorkin did one of her TV shows with us. Members also present information sessions on aspects of the hobby.” The club has several competitions, including amonthly contest for specific wine and beer classes, with points accumulating for an annual winner. “For those who don’t have entries for the class, they can compete for our fat monk ‘statuette’ which they hold until next month. In addition our members enter regional and national contests on alternate years. Because of Covid this year’s competition had to be cancelled.” The club also has amonthly newsletter and an informative website. “We regularly visit local industries and social outings. I find the atmosphere friendly and informative. Because alcohol is involved one has to be restrained when tasting — spittoons are provided — which is not that hard to do, as although there are no bad beers, some are better than the others. That makes it easier to consume moderately.” David says the club is a good place to meet with others with an interest in the hobby, whether making or tasting, with members ranging in age from their 30s. “Much can be learned by listening and talking with others. Disasters can be a learning experience.” 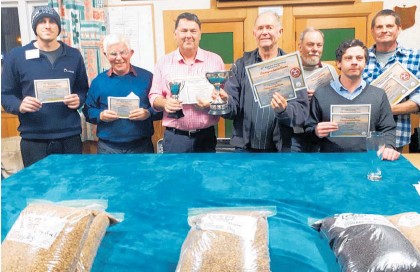