We’re not gonna take it

Yesterday nurses across the country walked off the job after the New Zealand Nurses Organisation (NZNO) “overwhelmingly” voted to reject a second offer in their current round of multi-employer collective agreement (MECA) negotiations on Monday. Here in Te Awamutu a group of nurses and healthcare assistants got involved by protesting outside Matariki Hospital and walking around 3km in and out of town. They could be heard chanting the lyrics from Twisted Sister’s We’re Not Gonna Take It as they walked to and along Alexandra St. They joined around 30,000 NZNO members including nurses, midwives and hospital assistants nationwide and were all on strike from 11am to 7pm yesterday. They were striking for better pay and staffing levels. Matariki Hospital healthcare assistant Rhonda Rhre says while there is a component for monetary value, they were mostly out there fighting for safer staffing. “We need to have the right number of staff for the right amount of care and the acuity of patients coming through now,” says Rhonda. Matariki Hospital nurse Jinky Belisario, who was passionately protesting by dancing at yesterday’s demonstration, says she often doesn’t feel safe when working. “It’s not new that we’re understaffed, we always have to get staff from agencies to cover but the workload and acuity of patients is still really heavy,” says Jinky. The nurses’ union wants a 17 per cent pay increase for all nurses and in April the union rejected an increase of around 1.38 per cent. NZNO lead advocate David Wait said the second offer hadn’t significantly changed and does not address issues nurses face. And on Tuesday, PM Jacinda Ardern said the Government is financially constrained. “Members are facing serious nursing workforce issues, with pay rates that do not attract people into the profession or retain the people we have, and staffing levels which stretch them to breaking point, putting them and their patients at risk,” says David. “We want the DHBs to be transparent about this being a large-scale problem where staff and patients are regularly put at risk. “The DHBs have attempted to respond to this claim, but after years of delays and failed promises, members want to see some accountability on their part.” The inclusion of a lump sum payment of $4000 differentiated the offer; part of this sum was a part payment on back pay owed to members through the pay equity claim. “Members know that lump sum payments do not lift actual rates of pay, which impacts on the long-term issues of a health system that values nurses and their work, attracts new people into the profession and encourages others back from overseas. “They also find it unfair that they are being asked to wait for the pay equity process, when there is uncertainty about when this will happen or what the results will be.” David said it was heart-breaking that nurses and other health workers feel so undervalued that they turn to industrial action. “Nobody wants this and the best way for future strikes to be avoided would be through a fair and decent offer,” says David. “We need the Government and the DHBs to come up with a profession-enhancing offer right now that truly recognises the contribution nursing staff make and that ensures the future of nursing for the wellbeing and safety of us all.” 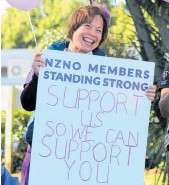