Scott steps up levels of endurance

O¯pa¯rau’s James Scott loves racing motocross and he’s already achieved in that sport more than many riders do in a lifetime, but now he’s hunting down national glory in a parallel but also quite different sporting arena. The 19-year-old Honda rider acknowledges that he is a relative rookie when it comes to enduro bike racing, but a casual observer might be fooled into thinking he’s one of the sport’s superstars, particularly after his stellar performances over the first three rounds of five in this season’s New Zealand Enduro Championships. Scott has certainly opened a few eyes this season and, first-timer or not, he has been serving notice to the top guns of the enduro racing code. He rode a Honda CRF250 when he was crowned national motocross No 2 in the 250cc class earlier this year, but his weapon of choice on the enduro frontlines has been a Honda CRF450X, almost twice the engine capacity to what he most frequently rides. The talented teenager, a fencing contractor during the week, tackled his first ever enduro event just last year and now, three events into his rookie enduro nationals campaign, he has lodged himself firmly in an overall podium position. Round three in the series was a gruelling two-dayer, held in forestry in the Moonshine Valley, halfway between Porirua and Upper Hutt, over the Queen’s Birthday weekend, and the tricky terrain was something that even an experienced mountaineer might baulk at. The top two competitors at the weekend were vastly-experienced enduro riders Dylan Yearbury and Tommy Buxton, although Scott was never really too far behind them. Cambridge rider Yearbury won the combined two days overall, finishing just one second ahead of Helensville’s Buxton, while Scott recovered from a disappointing day on Saturday, improving on Sunday and finishing the weekend third overall, 53 seconds behind Buxton. Scott showed great strength and versatility to cope with the slippery tree roots, logs, rocks, creek crossings, bogs and insanely steep down-hills and finish the weekend ahead of such noted former Kiwi internationals as Thames rider Chris Birch and Manawatu¯ ’s Paul Whibley, as well as more than 60 other enduro specialists. “I just didn’t have the pace on Saturday after crashing. I went a lot better on Sunday. I still suffered a couple of crashes, which didn’t really help things. “Racing enduro has been good fun. I’m really enjoying it during the motocross off-season. It’s good to have more bike time really. “The CRF450X is a bit heavier than my motocross bike, but it’s very smooth to ride and doesn’t beat me up. That’s what you need when you’re riding long distances over pretty rough ground. I’m pretty sore after hitting a tree but I’m okay. “I think I’m getting respect from the enduro boys. At least I hope so. Riding enduro is very different from motocross. You’ve got to be more precise with where you put your wheels. You can’t just go nuts. You’ve got to think things through a bit more and learn to read the terrain.” After three round, Scott’s series scorecard reads 4-2-3 and he is just seven points behind Buxton (1-3-2), meaning there is still a good chance for Scott to move up the rankings at the final two days of racing this coming weekend. The final two rounds will be run at separate venues in the Wairarapa region. Round four is set for farmland near Masterton on Saturday, June 12 with the fifth and final round to be fought near Martinborough the following day. 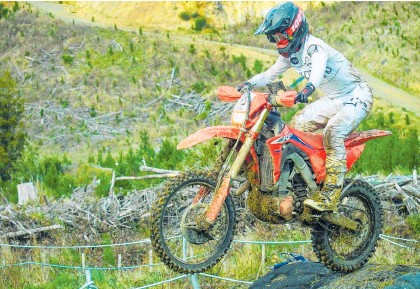